K-9 out on Parole 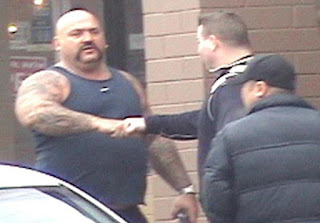 Kim Bolan is reporting that "Ion Kroitoru, also known as Johnny K-9, has been ordered to live in a halfway house and not to have any contact with gangsters or criminals. The colourful former wrestler, biker and bit actor pleaded guilty in 2013 to conspiracy to murder the Bacon brothers and their Red Scorpion associates, and was was sentenced to 13 years minus time spent in pretrial custody. He was up for statutory release in August." That means he's out on parole.

I don't want to minimize the seriousness of the charges K-9 has been accused of over the years back in Ontario as well as here in BC. Without trying to offend the multitude any more than I already have, I have to admit that K-9 is a bit of a local celebrity. What was his crime? He and several others plead guilty to conspiracy to murder the Bacon Brothers. We need to remember that this was after the Surrey Six when the Bacon brothers and a few associates planned and executed a gang murder targeting the leaders of the Red Scorpions with the sole intent of taking over that gang and have them sell drugs for members of the Hells Angels instead of the UN.

The reason that gang hit outraged everyone who lives here is because they also executed two innocent bystanders for simply being witnesses. That is why the Bacon brothers are hated so much in Surrey and why everyone and their dog flipped on them. After that incident K-9 was charged with a double tragedy. He plead guilty to being involved to some extent with the planning if not execution of the murder of Jonathan Barber. The target was Jamie Bacon. It was a tragedy that he missed Jamie and it was a tragedy an innocent person was killed. Jonathan was borrowing Jamie Bacon's car to fix the stereo.

There wasn't the same pubic backlash for that shooting as there was from the Surrey six. It was a mistake. They were trying to get Jamie Bacon. In the Surrey Six Jamie Bacon approved if not ordered the intensional execution of two innocent bystanders. They did it on purpose.

K-9 is also famous for being with Clay Roueche and several other UN members when they crashed Brandi's and kicked the Hells Angels ass. Michael Plante, a riod monkey Hells Angels associate who turned police informant, admitted to Kim Bolan that he was present that night during the fight when the UN kicked their ass and stated he was knocked unconscious. .

K-9 is a former pro wrestler and is Romanian. When my mother was a young child in Amherst Nova Scotia, her father died of scarlet fever so she moved to Vancouver to live with her Aunt and Uncle. The Aunt who raised her was born in Arad, Romania. When my daughter was in high school she went through a Romanian pride phase and had the word Romonka stenciled on the back of her jacket. Romonka means Romanian girl. She introduced me to Strazile by B.U.G. Mafia. I have to admit it is solid. Sounded Spanish but it was Romanian. Now it's all Regeton.

With all due respect to the UN, I would like to formally extend to K-9 the hand of fellowship and invite him to leave the life so to speak. Retire in good standing. Why not? The cops will be watching your every move. So once a guy get's out of prison what's he supposed to do? He's not allowed to have contact with gang members or criminals. Who's he gonna roll with? How about TBM Fresh start? I can tell you this, the Vikings from Scandinavia with TBM Fresh start will welcome him with open arms if he wanted to join them or associate with them.

Give Michael Green a friend request on Facebook and check out their TBM News page. Micheal is the International spokesperson for the group. Join the TBM Canada Facebook group. Maybe it could lead in a posative direction. The journey of a thousand miles begins with one step. Peace.

Update: I told you they'd welcome you with open arms: 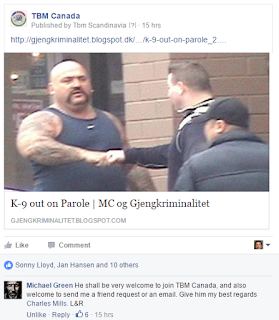 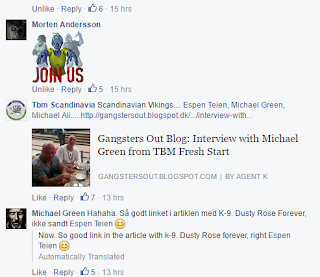 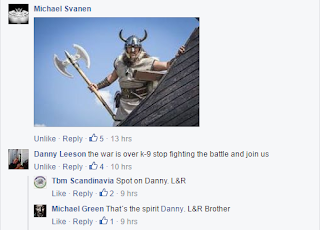 Just for the record, there is absolutely no need to shoot Jamie Bacon now. Natural justice is simple. He has to live with himself. Everyone thinks he's an idiot. He has no respect. He wasn't the mastermind behind the Surrey Six. He was just an Ork. His preppy little brother Jonathon Bacon is dead and his other brother Jared Bacon is in hiding. His claim to fame is fighting over a piece of pumpkin pie in prison. The guy is a complete loser. Living with himself is punishment enough. He's not worth the bullet. There's a fork in the road so there is.