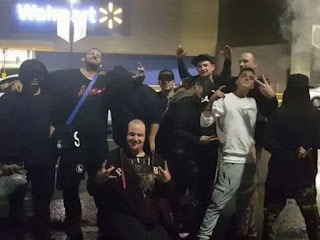 The Creep Catchers are sure getting famous. They are a group of citizens who pose as minors and arrange a meet up with predators looking for under age sex. They claim to have a caught a bus driver and now claim to have caught a cop. I have a lot to say about this one and the police are having a press conference on the subject today.

First let me say that I think it is a good idea. Predators are certainly going to be more hesitant organizing up a hook up with a minor knowing it could be a set up and they could be filmed and chased by a motley crew of creep catchers. However, I do have some concerns and will point out that sometimes good ideas go bad.

My first impression when I saw the video of the alleged bus driver was just what are they trying to expose? The fact that the bus driver was gay or the fact that he likes to have sex with minors. From the video it was hard to tell. If they are trying to rally a lynch mob to go after the guy because he's gay then that isn't just wrong it is also unlawful.

Many years ago there was a quasy detective series on TV called To catch a thief. It was based on a reformed thief who started working with the police to catch other thieves. The full quote was it takes a thief to catch a thief. So the headline in the Province would imply it takes a creep to catch a creep. Take a look at the photo. They dont look like a group of law biding citizens to me. When I see that picture the first thing that comes to mind is, OK let's run these names through the CSO database and do a criminal record search. Bingo.

The Vancouver Sun article states Ryan LaForge is the president of the Surrey chapter of Creep Catchers. When you search his name on the CSO database the most recent altercation he has had with the law was possession for the purpose of trafficking. He was found guilty. Ryan was charged with possession for the purpose of trafficking in Surrey Sept 22 2009. Three years before the brutal drug related murder of Janice Shore.

The other concern I have is entrapment. One of the articles said they had an under age girl go on an adult dating site and say she was 18. Then after a contact was made she would tell them she was younger than that. I'm an old man myself. Me hooking up with a girl in her 20's would be legal but creepy as f*ck. Nevertheless, how many of those creep catchers have been to a club and met a girl there who had fake ID and was pretending to be older than she really was. Luring someone in is not catching a predator. To catch predators they need to be on underage sites.

Then there's the question just what is under age. Up until recently the age of consent was 14. Old men from Idaho and Creston, BC were swapping young girls to become polygamist brides. 30 year old men were marrying 14 year old girls and it was entirely legal. The Conservatives finally brought the age of consent back up to 16. As far as I'm concerned that means if two 16 year olds fall in love and have sex, it's not a criminal offense it's no one else's business. If a 30 year old man has sex with a 16 year old girl, then yes that is creepy as f*ck, but I don't think it is illegal.

The Canadian Department of Justice web site states "The age of consent for sexual activity is 16 years. It was raised from 14 years on May 1, 2008 by the Tackling Violent Crime Act. However, the age of consent is 18 years where the sexual activity "exploits" the young person -- when it involves prostitution, pornography or occurs in a relationship of authority, trust or dependency (e.g., with a teacher, coach or babysitter). Sexual activity can also be considered exploitative based on the nature and circumstances of the relationship, e.g., the young person's age, the age difference between the young person and their partner, how the relationship developed (quickly, secretly, or over the Internet) and how the partner may have controlled or influenced the young person." If a predator seeks out someone on the Internet then it would appear the age of consent is raised to 18. However, if a group of creep catchers lures an adult on an adult dating site I'm not sure if that's the same thing. No doubt the court will if they haven't already, clarify the matter.

The bottom line is I think the creep catchers is a good idea but they need to do criminal record searches of their members just like every other volunteer organization and they need to stay away from adult dating sites and go after the guys who are looking for minors.

As for me, I don't go anywhere near that kind of stuff. I was totally creeped out when my daughter was in high school and her friends were getting fake ID to go to the Mirage. That creeped me out forever. The idea of going to a bar where there are patrons my kids age is nasty. A few years ago I went out for a beer with an old friend. The guy kept saying isn't the waitress hot over and over again. I finally looked up at her squinting and said she looks pretty young. She looks about my daughter's age. When you have a daughter it changes your perspective completely.

So are the Surrey Creep Catchers going to go after the crack dealers in Whalley pimping out 14 year old girls or are they just gonna keep slinging crack on the side? Are they the ones selling fentanyl pretending it's cocaine? Please advise.

Mind you if they caught Bill Fordy I'd sure give them the thumbs up.

Realted news on a pedephile ring in the UK:

Speaking of cops, The Canadian Press is reporting that "Seven current and former San Francisco Bay Area police officers will be charged in a sexual misconduct scandal involving a teenager who was later arrested in Florida in an unrelated assault case, a prosecutor said Friday. The wide-ranging scandal surfaced in June when the teenager, who described herself as a prostitute, said she had sex with about 30 law enforcement officials in Oakland and elsewhere in the region."

"The teen said she had sex with four officers before she turned 18 and sometimes traded sex for protection from arrest or tips about planned prostitution stings."

Update: The Vancouver Sun is reporting that "An RCMP officer is in custody following a Surrey Creep Catcher sting that was broadcast live online on Wednesday night. Assistant Commissioner Brenda Butterworth-Carr made the announcement at a news conference on Friday afternoon."

CNKW is reporting that It appears the Surrey RCMP officer embroiled in an online sting by the Creep Catchers group isn’t the first public officer to be caught. The so-called Creep Hunters caught a Kamloops sheriff last month. In August, Steph was the decoy, a 14-year-old girl new to town, taking to Craigslist looking for someone to talk to. It wasn’t long before she says a member of the justice system responded." OK now that is creepy.

Posted by Dennis Watson at 3:16 PM