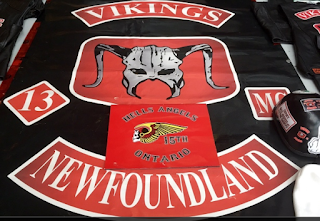 Big news on the east coast. CBC is reporting that "An arrest and charge has been made in connection with the killing of Dale Porter, more than two years after the man's death. Al Potter, 53, was arrested yesterday in London, Ont., and was charged with second-degree murder. Porter, 39, was stabbed on his North River property in June of 2014. RCMP said he later succumbed in hospital to multiple stab wounds." Court documents filed after Dale Porter's death in June 2014 show the RCMP believe Al Potter and Daniel Leonard - both biker club associates - were suspected of murdering the North River man. CBC is also reporting that 10 men have been arrested following multiple raids in Newfoundland surrounding the Vikings MC and their clubhouse. The raids took place the day after Al Potter was charged in the murder of Dale Porter.

Evidently in Newfoundland they're allowed to take pictures inside the court. 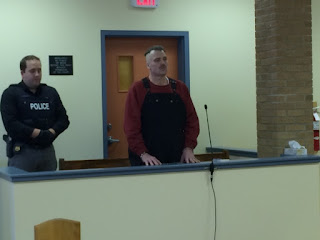 All but two of the men arrested are members of the Vikings Motorcycle Club. A local doctor and the son of one of the club members are considered associates of the Vikings Motorcycle Club, which police said Thursday is affiliated with the Hells Angels. During the raids Police seized over 2 kilograms of cocaine and 27 grams of powder sold as Heroin that actually contained Fentanyll. Back in in February 2016 a member of the Vikings MC in Newfoundland was charged with charged with possession for the purpose of trafficking. 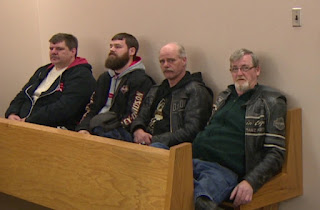 This is big news because it is a direct connection between the Hells Angels and the Newfoundland drug trade including Fentanyl. Before this we only had indirect connections to the Hells Angels. This is a direct connection and is the perfect example of how pride cometh before the fall. I've been bending over backwards trying to give these guys the benefit of the doubt saying they're not all criminals just a few of them who use the name of the club for criminal activity. Then they keep screwing up over and over again. If they are that determined to attain criminal organization status, who am I to try and stop them. Have at it you f*cking clowns.