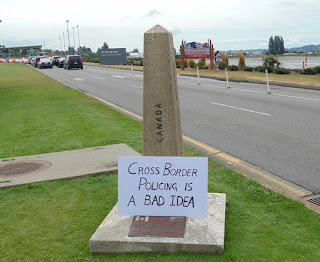 Well this is rather shocking. Despite the fact that Stephen Harper lost the last election, his insane cross border policing plan is still on the table. The Canadian Press is reporting that "Canadian diplomats will be pushing for the adoption of border legislation as the current U.S. Congress convenes for its final few months of business." WTF? Why in God's name would they do that?!

When the Americans found out that cops in Canada can get charged with murder for shooting someone without just cause they said no way and wanted diplomatic immunity. Giving a foreign police force jurisdiction in a foreign country is insane. Giving them diplomatic immunity to shoot whoever they want is a criminal act. Laura Dawson is a raging lunatic. She does not speak for Canada. Looks like we're going to have to start handing out more flyers at the border.

Laura Dawson is all about NAFTA chapter 11 and claims giving up Canadian sovereignty to Communist state run Corporations in China will bring billions and billions of dollars to Canada. She doesn't seem too concerned about giving up civl liberty or about setting up private medical clinics in Canada where they can make billions of dollars from organ harvesting prisoners of conscience. That doesn't seem to matter to her. It matters to me.

Operation Fast and Furious is a threat to National Security.