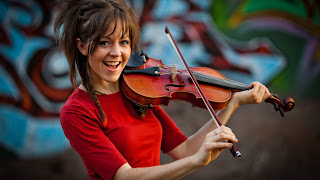 Hats off to Lindsey Stirling. She put on a great show in Vancouver. I was there. She's certainly no Miley Cyrus or Britney Spears trailer trash skank. She has a lot more class than that. Lindsey is a violin virtuoso. Her show was energetic, talented, tasteful and most of all inspiring.

Her new album Brave enough is referring to being brave enough to come back after she lost her best friend to cancer. The album starts off dark but step by step gets more posative as she processed the hurt and anger over the loss of her friend and became filled with gratitude for the time they spent together.

She talked about how she tried out for numerous talents shows including America's got talent and each time the door was closed in her face. They kept telling her she'd never make it. She'd never succeed. They said she sounded like rats being strangled. Yet she persevered. She is doing her own thing and it's good. She is proving them wrong and is a shining example of overcoming hateful critics. We all have trolls. They aren't worth the time. She has risen above them.

A shout out to the Federal Empire which is a new band that opened for her. The lead singer has long hair and plays an acoustic guitar. He's accompanied by a keyboardist and a guy on the electric guitar. I liked them. It's different and it's new. They are humble Americans with heart. The lead singer is like a young modern Ricky Nelson singing new beats. One of my pet peeves is all these Zoomers living in the past. I scan through the radio and all these local radio stations in Vancouver stuck playing old music from when we were kids. There's nothing wrong with playing an old classic once in a while but we've gotta move on and try something new. We've gotta grow. These guys fit the bill. Creating new positive music. Cheers. 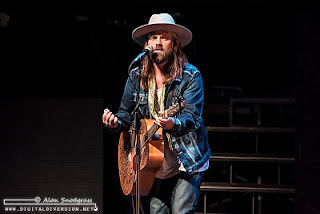 I totally understand why Zoomers listen to old music though. It's because the new music sucks. Pop, disco, techno - it's all garbage. That's why there are so many local radio stations that play old music. However, it is worthwhile to embrace new music that is good.