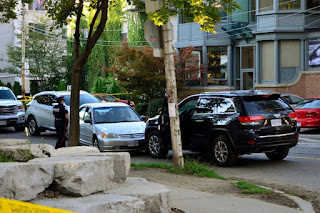 The Canadian Press is reporting that "A 51-year-old man accused of shooting a Toronto lawyer has been formally charged with 15 counts, including attempted murder. Toronto police say Grayson Delong - who was charged in his hospital bed Thursday - also faces a charge of disguise with intent and 13 firearms-related counts." The shooting took place last Tuesday afternoon outside the lawyer's office. After shooting the lawyer in the legs, the suspect was shot by a plainclothes police officer doing surveillance of the area.