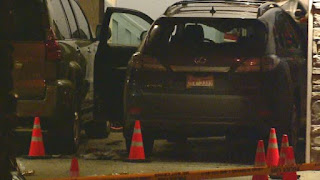 CBC is reporting that "Police were called to 22 Redstone Manor northeast about 8 p.m. MT on Tuesday where officers found Tran dead in the front passenger seat of the car in the attached garage. Lung, who was in the driver's seat, was rushed with a large police escort to Foothills Medical Centre in life-threatening condition. She was later pronounced dead. Her five-year-old son, who was sitting in the back of the car, was not injured in the shooting.

Police said Lung had a long history of associating with criminal networks and that the attack was likely targeted. Two other family members, including the woman's other child, were inside the house at the time of the shooting."