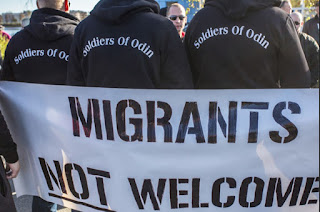 CBC is reporting that members of the Soldiers of Odin have been seen patrolling in Edmonton which comes as no surprise given the Whiteboy Posse and the hillbilly neo Nazi mentality of some who live there. Supporting that insanity is pissing on a good soldier's grave.

It started off as a good idea that went bad. Patrolling the streets to help stop violent crime is a good thing. Supporting racism and opposing immigration is not. They claim they are not Nazis but their actions contradict those words. Unless you're First Nations, we are all immigrants.

Europe has been plagued by two extremes. Hitler's Fascism on one side and Stalin's Communism on the other. Despite the fact that both extremes hate each other, when push comes to shove one is really no different from the other. It is tragic how many people in Europe believe the Operation Gladio bullsh*t. Tragically since the freedom of the press in North America has been outsourced, so do many people here. I believe in the Hamilton model.

Update: North America is different than Europe in the sense that here we are all immigrants. No single group has the right to persecute another. When people make hateful statements it is well within reason to ask where do those kind of statements lead? Hitler's anti Semitism lead to the holocaust. China's slander about the Falun Gong has lead the the secret holocaust where they are imprisoned, tortured and executed for their organs. That is contrary to the principles of a free republic as defined in the Irish Proclamation from the 1916 Easter Uprising.