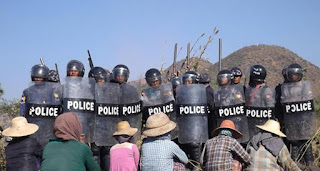 Canadian mining companies are giving Canada a very bad reputation in Latin America for unethical mining wrecking havoc on the environment. The root of the problem are shady trade agreements that have absolutely nothing to do with free trade.

Barrick gold is on the list of offenders aroung the world not just in Colombia. Thankfully, some recent rulings have caused some Canadian miming companies to halt operations in Colombia.

The Financial Post is reporting that "Canadian miner Gran Colombia Gold has filed a US$700 million lawsuit against Colombia under the Colombian-Canadian free trade agreement after the government ordered the company to cease operations at the El Burro site in Marmato until it has further consulted with local residents. Gran Colombia’s plan to flatten a mountain and create an open pit mine has also met with resistance." No kidding. They want to do the same thing in Clayoquot Sound. They want to blow the top off of Catface mountian and turn it into an open pit mine right in the middle of a protected biosphere.

So the mega corporation steam rolls over civil rights by suing the local governments under these bogus trade agreements for daring to impose laws that protect the environment and thereby inhibit their ability to make a toxic profit.

We've already discussed compensation awards under NAFTA chapter 11 where a company that wanted to import PCP into Canada successfully sued the Canadian government for creating laws that protected the environment and inhibited their ability to make a profit by poluting Canada. That clause was absolutely insane. Instead of removing that clause from successive trade agreements they tightened up the working to give corporations more power over the democratic will of the people. That insane practice needs to come to an end.

Local governments have the inherit right to enact laws that protect the environment. These bogus trade agreements remove that right. Then they lable anyone who disagrees with them as a terrorist and instantly removes their right to due process and kills civil liberty for everyone. This is corporate communism.

Amnesty International is reporting that "Canadian company Ivanhoe Mines Limited and Chinese mining interests have profited from, and in some cases colluded with the Myanmar authorities in serious human rights abuses and illegal activity around the Monywa copper mine complex, which includes the notorious Letpadaung mine, Amnesty International said in a report released today." 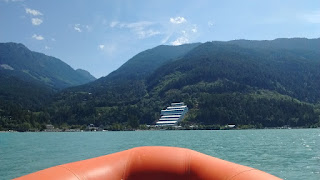 Yesterday we went on a sea safari out of Horseshoe Bay along the Sea to Sky highway up to Britannia mines. It was beautiful. Howe Sound is teaming with fish and biodiversity but it wasn't always so. Now Britannia mines is a tourist attraction. When it was in operation it was a big polluter of Howe Sound along with a pulp and paper mill across the water.

Ethical mining and sustainable development are terms we must embrace in the new world order. 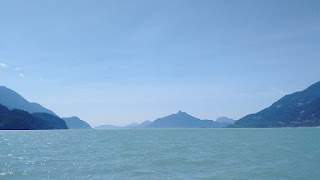