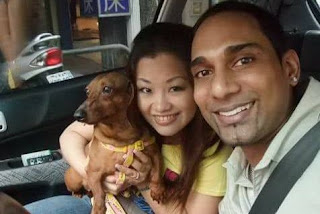 The Toronto Sun is reporting that Canadian teacher Ramgahan Sanjay Ryan was found murdered in Taiwan. His wife Cat drowned last October. "Taiwanese detectives are trying to unravel the grisly dismemberment slaying of a Canadian teacher whose body parts were discovered in a Taipei park. Cops say they believe the murder of Ramgahan Sanjay Ryan, 43, may have been drug-related. On Thursday, investigators discovered two machetes on a riverbank near where the English teacher’s body was found." Unusual for Taiwan.

Update: There has been some interesting developments in the case. The Taiwan News reported that "Israeli-American murder suspect escapes after being surrounded by Philippine police." The Taiwan News is also reporting that "Reports have surfaced that the two men suspected of brutally butchering a Canadian English teacher in New Taipei last week served in the Israel Defense Forces (IDF), the United States Marine Corps and trained in MMA before moving to Taiwan, where they taught children English at various cram schools."

When they say drugs were involved it sounds like they were just selling pot.