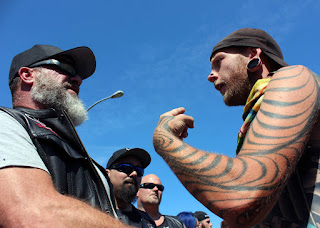 Why is this not surprising? Extremists clash over the lawlessness of Nanaimo tent city. Each having their own hidden agenda. I support neither. The Soldiers of Odin are racists that protest immigration despite the fact that they themselves are immigrants. The supporters of Discontent City are Anarchists who don't want homes for the homeless they just want to create pockets of lawlessness like they did on the Surrey strip. The supporters of Discontent City called the Soldiers of Odin Nazis but they failed to mention that they themselves are Anarchists. Fascists and Anarchists clash all the time. Both groups are complete wingnuts.

The Action Against Discontent City is the voice of reason within that conflict. The solution is simple. Call their bluff. Build them modular homes, then get rid of the tents. Affordable housing is a colossal concern but supporting the drug trade by creating pockets of lawlessness is not the solution. Setting aside zoning for rental units is.