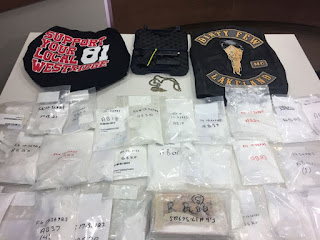 ALERT, the uncompromised Alberta Gang Task Force is reporting that "A joint investigation between ALERT and RCMP’s Federal Serious and Organized Crime has dismantled an extensive cocaine distribution network linked to a member of the Hells Angels and support club members. Project Entry was a year-long investigation that resulted in 10 people charged with 45 criminal offences. Those accused allegedly fulfilled various roles within a cocaine distribution network that impacted the communities of Edmonton, Spruce Grove, Cold Lake, Whitecourt, and Grande Prairie. Project Entry resulted in the seizure of five kilograms of cocaine, half a kilogram of the buffing agent Phenacetin, cannabis resin, and a handgun. Multiple vehicles and motorcycles were seized, along with $13,000 cash proceeds of crime."

"At the centre of the investigation was Hells Angels Westridge (Edmonton) member William McCabe. The 47-year-old man from Spruce Grove allegedly oversaw cocaine trafficking operations and facilitated distribution through various communities. McCabe has been charged with instructing a criminal organization. Project Entry also implicated two support club members, Shane Daly and Pascal Jacques, who are members of the Dirty Few Lakeland chapter. Support clubs are typically utilized to carry out lower-level dirty work for the Hells Angels, such as drug trafficking and expanding territory to secondary markets." The Dirty Flu strikes again.

Evidently William McCabe took over the drug trafficking after Dominic DiPalma Jr. was busted. Too bad the BC Gang Task Force is compromised. Otherwise they'd be making real Hell Angel cocaine busts like all the other provinces instead of aiding and abetting them. 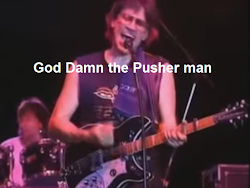