Smoke on the water, fire in the sky 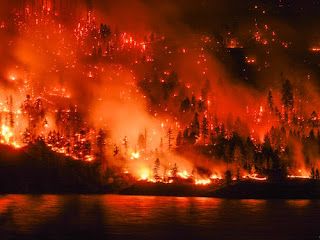 Smoke On The Water. July was flawless. August, not so much. A few weeks ago as the sun rose over the horizon it was bright red. We now know what that means in BC. In means smoke from forest fires. For the last few weeks the summer sky has been clouded with smoke and tonight the smoke has started to descend into the city. We really need to be more proactive in dealing with these forest fires. It is becoming an annual event.

It's heartbreaking to see a forest beside a lake burn to the ground like in the above picture from Peachland. It was right beside a water source. There is no reason for this. We need to install fire hydrants and irrigation for the next generation of tree planting. One of the reason we have so many forest fires now is because of the long dry summers. This can be eased through irrigation.

Several years ago I attended the Joey Verma trial in Kelowna. I stayed at the Bear Creek campgrounds on the west shore of the lake. There was remnants of a previous forest fire. One employee said a few years ago a forest fire in West Kelowna came right up to the campsite. One crazy old man with a garden hose refused to leave and held the fire off single handedly. Installing fire hydrants and sprinklers in forests near water sources will be a step forward for everyone.

We also need a few big ass water bombers the size of a B-52. Justine Trudeau wasted all that money buying a pipeline that already existed when he could have purchased some water bombers instead to fight the fires. That shows you where his priorities are.