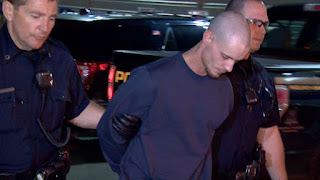 CBC is reporting that "A day after Calgary police found three people slain in two different locations, the force says the killings occurred almost a week apart. Dustin Duthie, 25, has been charged with three counts of second-degree murder in the deaths of Taylor Toller, Shawn Boshuck and Alan Pennylegion. CBC News has confirmed that the dead are the accused's girlfriend, his mother and stepfather. A duty counsel lawyer representing Duthie appeared before a justice of the peace Wednesday morning in Calgary." That is psychotic and premeditated.

So I guess those wingnut Anarchists think this is OK right? After all, no laws mean no laws. "Do what thou wilt shall be the whole of the law" right? Not on my watch ya freaking lunatics.

Posted by Dennis Watson at 2:19 PM