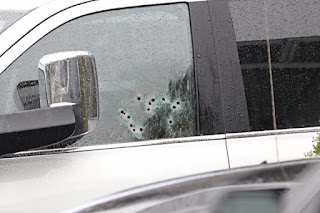 The Indo-Canadian Voice is reporting that "ON Thursday, October 20 just after 11 p.m., Langley RCMP was called to the 7700-block of 211B Street following a report of a shooting. Police located an adult victim suffering from gunshot wounds. The male was pronounced deceased at the scene. A short time later, a Ford F150 fully engulfed in flames was located in the area of 232 Street and 76 Avenue." The Langley Advance is reporting that "A series of bullet holes can be seen in the drivers side window of a SUV." That's yet another illegal gun and magazine BTW.
Posted by Dennis Watson at 10:03 PM