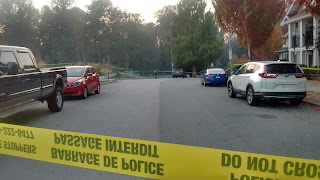 The Vancovuer Sun is reporting that "The mood was sombre at Burnaby RCMP headquarters Tuesday and officers wore blue ribbons pinned above their hearts after one of their own was killed in the line of duty. The officer was fatally stabbed Tuesday morning while helping city bylaw staff check on a man living in a tent at Broadview Park."

"Postmedia learned the officer was with city parks staff checking on a homeless camp or lone tent in the 4000-block of Gilmore Avenue just before noon. A civilian found the officer critically wounded and called 911. Responding officers found a suspect, who was shot and wounded. The wounded man was taken to Royal Columbian Hospital and was said to be in stable condition. The officer was taken to Vancouver General Hospital where she was pronounced dead."

Homeless camp or lone tent - there's a big difference. When a bear kills someone you put the bear down. These homeless camps are not what they used to be. Housing is a legitimate concern but promoting drug use and lawlessness is not the answer. This is the change each community needs to address. What we are doing now is wrong. We need to stop it.

Update: I rode down to the scene and it was all blocked off still. CTV and Global had cameras and reporters on scene. Kamil Karamali from Global was doing a live interview and said it was a single tent that has been there a couple of weeks not a homeless camp.

He was able to get a visual from a balcony over the police tape and they had a helicopter in the air as well. He's actually a really nice guy. The kind of person that actually speaks with witnesses and is the kind of person witnesses would trust speaking to. I see from his Twitter they did a Crime Beat episode on the Maple Batalia murder. Maybe there's hope for Global after all.

Burnaby RCMP describe her as compassionate and caring – using those skills at her job as part of the Mental Health and Homeless Outreach Team. @globalbc pic.twitter.com/wjz15l7x3S