Ken Sims was elected by a substantial margin as mayor of Vancouver over the incumbent Kennedy Stewart. More importantly, Ken Sims' party, ABC Vancouver, won seven of the ten seats on council. Kennedy Stewart was a mayor without a party. Ken Sims is in a position to make a difference. I do not believe Brenda Locke received more votes than Jinny Sims and all the other candidates in Surrey. That ridding needs a legitimate physical recount with scrutineers. 973 votes. 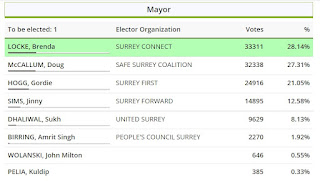