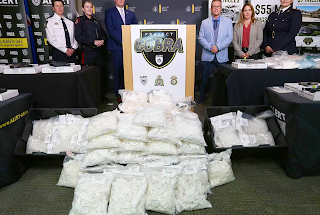 City News is reporting that "Alberta Law Enforcement Response Teams (ALERT) seized $55 million worth of cocaine and methamphetamine in a joint investigation that led to a cross-border drug bust. ALERT along with the U.S. Drug Enforcement Administration (DEA), and RCMP Federal Serious and Organized Crime, seized the drugs as part of an operation authorities called Project Cobra. The investigation lasted nearly three years and was focused on drug importation, drug trafficking, and money laundering across the Canada/U.S. border.”

"Officers intercepted 928 kilograms of methamphetamine, 6 kilograms of cocaine, and 19 guns including handguns, rifles, submachine guns, and suppressors. Fifteen people – 11 of which are from Calgary – and one Calgary-based business are facing 80 charges, including money laundering, drug trafficking, and organized crime-related offences."

This is what the CFSEU doesn't do. When they make a fake bust, no charges are laid.

CTV is reporitng that "ALERT alleges that the head of this criminal organization was Ricco King, a 50-year-old man who was well-known in Alberta from previous organized crime investigations. King resided in, and owned, multi-million dollar mansions in Niagara-on-the-Lake, Ont. and in the Halifax, Nova Scotia area." They wouldn't name the criminal organization but Ricco King was tied to Talal Fouani who was a Hells Angels associate. 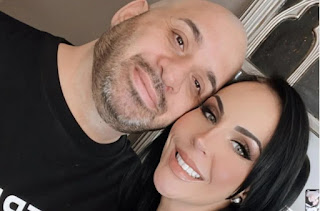