Dominion Voting in Surrey and Vancouver

The Report of the Chief Electoral Officer stated that "Elections BC partnered with several service providers to administer the referendum, and would like to acknowledge the hard work and effort of BC Mail Plus, Canada Post, the Center for Civic Design, Dominion Voting Canada, Elevator Strategy, Fujitsu Consulting Canada, Service BC, and Queen’s Printer."

The City of Vancouver's Clerk Department's response to the Request for Access to Records under the Freedom of Information and Protection of Privacy Act states that "1. Proposal response packages submitted by vendors Dominion and Elections Systems & Software in response to RFA No. PS20161793, Supply of Optical Ballot Tabulators; and 2. Contract signed between City of Vancouver and Dominion as a result of Dominion's winning RFA No. PS20161793 bid, from March 1, 2017 to June 30, 2017." Yeah, that's what I thought.

Meanwhile back on the ranch, Elections Canada tweeted "Elections Canada does not use Dominion Voting Systems. We use paper ballots counted by hand in front of scrutineers and have never used voting machines or electronic tabulators to count votes in our 100-year history."

Surrey has used electronic voting for years. They do not use paper ballots counted by scrutineers. Ontario's experiment with vote-counting machines could change elections to come. No kidding. Ontario had glitches in their municipal election thanks to Dominion voting software as did New Brunswick. Calls for recount grow in New Brunswick after technical glitch.

Surrey is using the same machines Ontario used. Dominion Voting received $400 million from the Communist Party of China. They donated to Hilary Clinton and Justin Trudeau. They share office space with George Soros shell companies in Toronto. All of that is a conflict of interest. 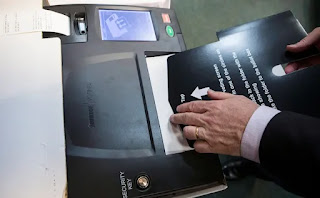 Global fake news admitted that "A company that provides election tabulation software in Canada and the United States is blaming a Toronto service provider for choking online voting traffic in 51 Ontario municipalities on Monday evening, which caused many cities and towns to extend their voting periods. The system issues surfaced around 6 p.m. ET and lasted approximately 90 minutes, according to a statement from Dominion Voting Systems."