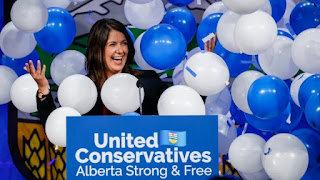 True North is reporting that "Danielle Smith will be Alberta’s next premier after winning the United Conservative Party leadership contest on the sixth ballot." That means she will replace Jason Kenney who resigned and become Alberta's next premier.

"Smith pledged to overhaul Alberta Health Services, to never lockdown the province again and to never enforce vaccine mandates — and to change regulation so it becomes illegal to do so. She promised to go toe-to-toe with Ottawa, which she said created a constitutional crisis when it blocked Alberta’s constitutionally-protected right to develop its own resources. Smith also supports the creation of an Alberta police force." Getting rid of the RCMP makes police accountable to the voters who pay their wages. Provinces push back against Trudeau’s gun grab.

Will Manitoba and Saskatchewan get rid of the RCMP next and form provincial police forces like Alberta? Perhaps. If the RCMP start seizing legally acquired guns they sure will. Canadians want a police force that is accountable to them not to the UN or the WEF.

To serve and protect the people who pay their wages and elect the government that creates the laws the police are paid to enforce. They have sworn an oath to defend the Charter of Rights. Keeping that oath is a good thing. Betraying that oath is not. History has recorded that.