I had to get out today and go for a ride. I was feeling anger, depression and rage. They say depression is unresolved anger. If you don't process that anger it will turn to rage and eat you alive. I have two thoughts to share. Today the Freedom Convoy posted this picture of riot police stomping on a Canadian flag. Now I have a hard time believing any Canadian would do that especially a Canadian law enforcement officer. This gives rise to my previous concern.

The CIA is watching the events unfold in Ottawa very closely and are obviously offering their support to Justan Idiot. We saw a lot of police officers en mass yesterday in Ottawa in a grandiose show of bullying. We heard some VPD officers went, we heard about the RCMP Musical Clowns that attended but there were no doubt private contractors in the mix.

These hillbillies pointing their guns at a guy in a trailer were not Canadian police. They were hillbilly private contractors. "Dude, step on my back for the camera while we raid this empty trailer. We're all tactical." No, you're a f*cking idiot and I'll tell you why. Any private contractor that makes a six figure income is not a soldier serving his country. He is a mercenary serving his wallet. This is why I never go to the tactical side of the gun range. I have no desire to cross the firing line with those idiots stranding beside me. That is not safe.

We saw the RCMP Musical Clowns brag about racking up overtime at the protest just like how Derek Brassington from IHITit was charging taxpayers OT for getting drunk at the club and having threesomes with witnesses. We also saw the RCMP Musical Clowns brag about getting put up in the most expensive hotel in Ottawa, the Chateau Laurier. Unethical mercenaries getting bribed at the taxpayers expense. However, some of the riot police appear to be UN goons.

Here's the deal. We all saw ANTIFA riot and loot. Riot squad didn't do sh*t. All of a sudden they are chomping at the bit to brutalize peaceful protesters. Those are oath breaking lawless bullies kicking the cat. Using force against the rioters would have been appropriate. Using force against peaceful protesters with a legitimate concern was absolutely shameful. Now I know everyone wants to blame the cops and it is very hard for me personally to ever look at another police officer again with any shadow of respect, but that is exactly what the CIA and their private contractors want. This brings us to the defund the police movement.

Justin Trudeau supported the defund the police riots. He sure funded the police in Ottawa to save his ass when the people came for him. Just like AOC demanding private security for her while inner city police budgets are slashed promoting crime and lawlessness in communities across the country. Why do they want to defund the police? To create a federal police they can control like the gestapo. The private contractors want to discredit the police to justify hiring them with their exuberant six figure salaries. Erik Prince is a dirty POS. A bitter tree cannot bring forth good fruit. 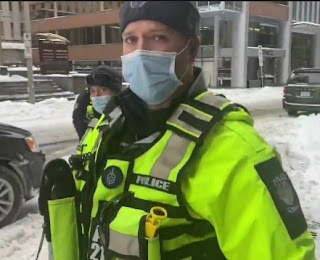 OK this guy, he's another POS. The camera wasn't in his face. He's lying. Like when they beat a guy on the ground and yell stop resisting when he isn't resisting. Is he Canadian? Probably. Contrary to popular belief, there are indeed a lot of a*sholes in Canada. There is good and bad in every group. Yet some are pulling together to make a difference and remind them of their oath.