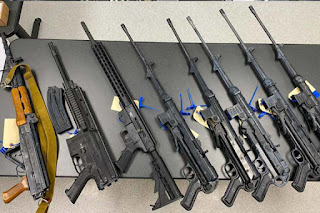 They claim it was a joint task force and that CFSEU was involved. I find that suspicious since they no longer make drug busts. Normally it's just a few token busts to show the press with no arrests. 3 kilos of fent and 5 kilos of cocaine is not a token bust yet this was a years worth of raids so it's hard to put it in perspective. They were obviously after the cars and cash.

As for the rifles, I'm not sure what they are. The first one is obviously old and has been cut off. The front kinda looks like a SKS but the back doesn't. It kinda has that Israeli Tavor look as do many of the others. They look similar to the ones seen on the Haney rap video with Stiff Gritty.