Ottawa Protest as witnessed by Police on Guard 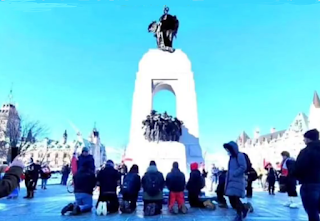 Police on Guard is reporting that "Many of us in Police on Guard have just returned from Ottawa and many of us are still on the ground there. We wanted to provide an update, so you could hear the details from us, on exactly what is taking place in Ottawa."

"Unfortunately, we are aware of what some of our country’s leaders and mainstream media are saying transpired. So, we want to be clear on what we witnessed while we were there and what is still taking place. We witnessed nothing but love, kindness, peacefulness and patriotism from our fellow Canadians. While there are always a few bad actors in every group, those that carried offensive messages or images, were asked to leave the area, as their message was not welcome. This was done without any violence or escalation of the situation."

"Many protestors cleaned the streets of garbage, placing it in a central area to make it easier for the city to pick up. Proud Canadians from every walk of life that were in attendance also cleaned statues and monuments that were in any way treated poorly, while many others laid flowers at the tomb of the unknown soldier. We thanked the Police Officers for their service and were told on numerous occasions that this was one of the most peaceful demonstrations they have seen."

Why is Justin Trudeau still in hiding?

I wanted to see for myself what Justin Trudeau was so afraid of.

The legacy media doesn’t want you to see this video.#TruckersForFreedom pic.twitter.com/rfKoCVijqr

🇨🇦 @MattBrevner and I had no luck finding a white supremacist at Vancouver’s Freedom Convoy today.
Check out our cross Canada convoy coverage at https://t.co/ncTEWCCvEY pic.twitter.com/FDlzdRuF3f

Posted by Dennis Watson at 3:08 PM