I have two questions. 1) Is this related to the Gulf War syndrome? Many US soldiers came back having been exposed to chemical agents and incurred prolonged side effects.

2) WTF are all these biolaboratories the Pentagon is running all over the world? Who funds that? The day before 911 Donald Rumsfeld said that the greatest enemy America now faces is the Pentagon bureaucracy. He claimed that the Pentagon was missing $2.3 trillion and that the military can't account for 25% of what it spends. The next day that was all forgotten. 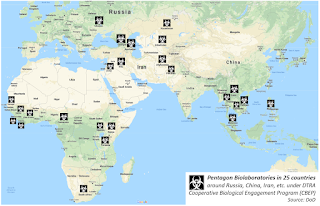 Update: This is a document that has been removed from the US governement website on the Ukraine. This is the archived version of the page before it was taken down. This is the documented now posted on my mirror. There are more.

The first document refers to the State Regional Laboratory of Veterinary Medicine in Luhansk which is a city in the disputed Donbas region. As I have been digging around looking for information about the US' bio labs in the Ukraine, many of the doctors associated with them are veterinarians. Perhaps since some of the studies have involved how pathogens have effected livestock like the bat studies in Wuhan. This document states that the Integrating Contractor is Black & Veatch which is tied to Metabiota. The document states that the Donor is the Department of Defense of the United States of America (DoD) and that the Permit for working with Pathogens will be obtained after signing TOC and MoU.

Institute of Veterinary Medicine of the National Academy of Agrarian Sciences Fact Sheet. This fact sheet states that it is a Memorandum on technical assistance for project recipients of the State Committee of Veterinary Medicine of Ukraine and National Academy of Agrarian Sciences of Ukraine and that the donor is the United States Department of Defense.

This is not a Wikileaks thing. These are all documents the US government posted on their website and took down after the Russian invasion of the Ukraine. The Memorandum of Technical Assistance states that the Integrating Contractor is Black & Veatch and that the address for the Institute of Veterinary Medicine of the National Academy of Agrarian Science Address is 30, Donetska street, Kiev, Ukraine. All these bio labs fall under the Ministry of Health.

All of these US bio labs in the Ukraine state that Permit for working with Pathogens will be obtained after signing TOC and MoU. I'm not sure what the Transfer of Custody means. Something to do with the misuse of the diplomatic status perhaps. When Israel went astray, God used Nebuchadnezzar to set them straight. It's the same thing with the US of A. The Pentagon has been turned upside down. That swamp needs to be drained and repaired.

The Electronic Integrated Disease Surveillance System (EIDSS) is a software system which is designed to strengthen monitoring and prevention of human and animal diseases within the One Health concept, and facilitate compliance of International Health Regulations (IHR) 2005.

"The Pathogen Asset Control System (PACS) is an electronic system for accounting, management and control of biological agents. The application is designed to monitor the reception, transfer, movement and destruction of agents, as well as other actions performed with biological materials. The system allows tracking materials of any kind."

Are they still using the PROMIS software?