Quebec is phasing out its vaccine passport 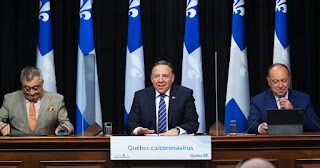 True North is reporting that "Quebecers will no longer be obligated to show their vaccine passport to access basic services and goods. On Tuesday afternoon, Quebec premier Francois Legault announced that the province would phase out its vaccine passport system by March 14, 2022."

"As of February 16, Quebecers will no longer need to present proof of vaccination to enter big-box stores, liquor or cannabis stories. As of February 21st, Quebecers don’t need to show their vaccine passports to enter places of worship or funerals. Since the freedom convoy began, multiple provinces have dropped their public health restrictions. Quebec joins Saskatchewan, Alberta, Manitoba, PEI and Ontario in phasing out its vaccine passport system."