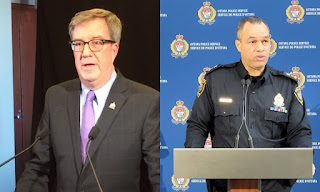 If Black Lives Matter why did the brother resign for doing what the two white guys told him to do?

True North is reporting that "Ottawa Police Chief Peter Sloly has resigned from his position after facing criticism for his handling of the Ottawa freedom protests." Stealing gas was illegal.

Another fall guy for Justin Trudeau's screw ups. Lawyers from the Justice Centre warned that stealing gas from civilians is illegal. But they did it. They broke the law they swore an oath to uphold. Justin Trudeau told him to do it and he did it. Now he has to resign so Justin Trudeau doesn't get sued. Just like how the finance minster resigned over his scandal.

"On Monday, Prime Minister Justin Trudeau invoked the Emergencies Act to increase the powers of law enforcement to quash the protests. The Act would also allow the federal government to play a larger role in coordinating the response to the Canada-wide demonstrations against COVID-19 mandates. The Liberals have seven days to table a plan and justification of their decision to Parliament which will then vote on whether to enable the government to adopt emergency powers. Part of the act will allow banks to freeze funds of truckers without a court order and for government bodies to cancel their insurance."

Cancel their insurance? Justin Trudeau is the laughing stock of the fee world.

Are these the people who like to give lessons to other countries about democracy and freedom?

This is one of the top ranking countries in the “democracy index”?

Your credibility on these topics is now worth 0.pic.twitter.com/wCjh9bXwDt

"When a government starts trying to cancel dissent or avoid dissent is when it’s rapidly losing its moral authority to govern -Harper in 2005" - Trudeau in 2012 pic.twitter.com/HAEgy7wBxg