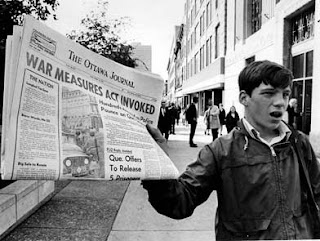 Before I dive into the darkness, I just want to point out a historical fact. The last time the War Measures act was used was to put Japanese Canadians into prison camps and steal their land from them after the bombing of Perl Harbor. We all know that was wrong and a horrible thing to do. Canada has since apologized and made a token attempt at reparations. (The confiscated land was never returned.) These are the dark days Justin Trudeau wants to return us to.

SHOCK: Trudeau’s justice minister says that being “pro-Trump” is a factor that will decide if your bank account is seized under their Emergency Orders. https://t.co/Ez5GPgvup1