Lift the mandates and you lift the blockade

Open Letter to the Canadian Truckers from Dr Robert Malone 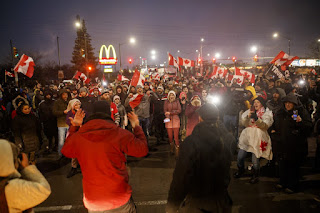 OK so sh*t be cray yo. There are more border blockades ramping up. This time in Ontario. Before I dive in, I want to clarify that I do not support blockades for the same reason I don't support lockdowns. I'm not saying that because I'm afraid Google will delete another blog post. I don't give a f*ck about Google. They are reprehensible. I use their blog because it's convenient but I can post from my website or another source in a heartbeat if they don't stop f*cking with me.

When the local Communists were blocking trains, I opposed that. I'm all for someone's right to protest. Free speech is protected by law. Yet people have a right to go to work. If you stop me from going to work, you are stealing the money out of my pocket. Do unto others...

As I previously said when talking about the border blockade in Coutts, Alberta, I'm nobody. People are free to do whatever they want. I'm just saying I don't support it even though I understand the intent and sympathize with it. Lets Go Brandon.

I oppose lockdowns for the same reason. The government does not have the right to stop me from going to work over a bullsh*t manufactured emergency the State run media is misrepresenting. When they do that they are stealing the money out of my pocket and we can all see the World Economic Forum's insane agenda.

Putting the blockades into perspective I will compare them with the right to strike. When you go on strike the employees try to do economic damage to their employer in hopes they will cave in to the employees demands or concerns. Yet these lockdowns have caused enough damage. I support business and I support commerce. That is what I support.

The blockade in Coutts, Alberta was very effective. Why was it effective? Walt 'til I tell ye. It was effective because Jason Kenny is a Conservative, or at least pretends to be. Rob Ford doesn't even pretend any more. Jason Kenny cares about a balanced budget. Justin Trudeau does not.

If you do economic damage to Justin Trudeau, he will laugh like a little girl and spend more of your money then blame it on you. If the stores run out of food, he doesn't give a rat's a*s. He will use that opportunity to make you look bad despite the fact that he is the one that has caused the problem. All he had to do was lift the vaccine mandate for cross border truckers because it doesn't make sense. Instead of doing that, he's introducing more vaccine mandates.

Justin Trudeau is a POS. He doesn't give a f*ck about Canadians. He is a glutton that only cares about himself and the World Economic Forum's Communist agenda. That should concern every Canadian including the Socialists. Moammar Gadhafi was a Socialist. He spoke out against the pharmaceutical companies that send out viruses to sell their vaccines like virus software companies send out spyware. He called Covid the fish flu. Fish flu, bat flu - he was close.

Normally, when one union goes on strike, other unions will respect their picket line. Only scabs cross picket lines. People who live off of others are stealing the bread from their tables. A few years ago, many bicyclists in Vancouver staged protests. They'd block bridges temporarily to raise public awareness. As a result, Vancouver has a lot of bike paths including on the Burrard Street Bridge and the Georgia Street viaduct. It's the same with the truckers. There is no need for them to have vaccine mandates since they don't interact with the public. Omicron was a fraud.

Doug Ford and Justin Trudeau have no right to say a word about economic damage the blockade may cause. Their lockdowns have done far worse and they had absolutely no regard for the economic welfare of voters then. There was a meme going around mocking this that said Justin Trudeau demands truckers stop shutting down businesses so he can. Justin Trudeau and Doug Ford's popularity is in freefall. When Brian Mulroney and Gordon Campbell's popularity sunk that low they resigned. Justin Trudeau won't. That says it all. That's why people are protesting.