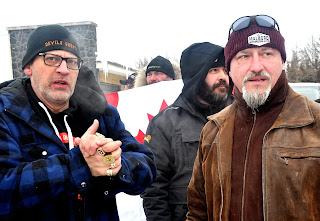 OK I'm going to talk about this ridiculous article someone just sent me. Le Journal de Montréal is reporting that Stéphane Gagnon from the Quebec Hells Angels supported the truckers convoy in Ottawa. Yeah, well good for him. If the Hells Angels support freedom are we supposed to oppose freedom and become communist slaves? GMAFB.

This ties in with another ridiculous statement Donnie the rat McWhirter recently made. Blaze recently claimed that I had turned to the dark side for supporting the Freedom Convoy and claimed that the Edmonton Hells Angles also supported it. My response was simple. If the Edmonton Hells Angels want to support freedom, then more power to them. Justin Trudeau and the WEF are the dark side not those opposing them.

The article admits that Gagnon has already campaigned for the Liberal Party of Quebec, which allowed him to be photographed with the former Prime Minister Philippe Couillard in 2008. So Hells Angles aren't allowed to vote? They wont freeze their bank acoutns for drugs but will if they vote for someone ele? The article then points out that On December 21, on his Facebook page, he called the Minister of Public Security, Geneviève Guilbault, a "big cow" because she asked for the assistance of the Canadian Armed Forces to speed up the vaccination of Quebecers when the Omicron variant threatened the capacity of hospitals. This means two things.

It means that the Liberals under Justin Trudeau and the NDP under Jagmeet Singh are losing support from people that previously supported them so next election will be different and both parties will lose seats. It also shows that this fake news outlet is still lying about Omicron.

"When the Omicron variant threatened the capacity of hospitals" - F*ck off. We all saw how the media maliciously misrepresented Omicron. The hospitals were not full of people in the hospital for Omicron. That was a bold faced lie. The hospital was full of patients like it always is. Some of them tested positive for Omicron even though they had no Covid symptoms. That's not why they were admitted to the hospital. The real science says that's not a case. The real science says you need symptoms and a positive test result to be a case. One without the other is not a case.

Omicron was less severe than the seasonal flu. Locking down over Omicron was a criminal act. Bringing in the military to force a vaccine that doesn't work for a virus that doesn't matter was Orwellian just like the fake news is. Maybe the Hells Angles don't want to give up all their motorcycles for Justin Trudeau's fake environmentalism like the rest of us. That's understandable.