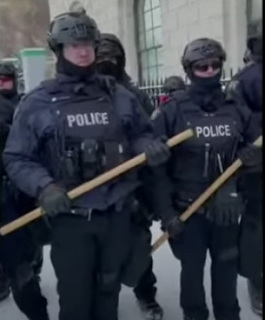 One again I just have to set the record straight. If the police want to make mass arrests then do it. Stop bullying peaceful protesters with threats of physical violence. That is dysfunctional.

Here in BC we are well familiar with logging protests where people would lie down and force the police to carry them off and arrest them. That is peaceful civil disobedience. Now that the horses trampling civilians video has gone viral they appear to be massing thousands of police with clubs in a threatening manner to bully Canadians into giving up their Charter Rights.

Although I don't support blocking bridges or borders, people have a Charter right to stand with a sign. That is an unalienable right. The police know that so instead of arresting everyone like they should they are bullying them with threats of physical violence. That is unacceptable.

February 23 is pink shirt day part of the anti bullying campaign and here we have oath breakers bullying peaceful protesters. Isn't that ironic? People have a right to protest. They have the right to be arrested peacefully if corrupt governments deem lawful assembly illegal. If they are going to violate the right to a peaceful arrest as well as every other Charter right under the sun then people have a right to stand their ground and film you beating the sh*t out of them for the world to see. That is their right. As Martin Luther King declared, we shall overcome.

Stage Lineup was cancelled, police checkpoints in place, but despite all hurdles, thousands of Canadians continue to peacefully assemble. 📍Queen and Bank, Ottawa 6:30pm pic.twitter.com/HC8Su7zdIR