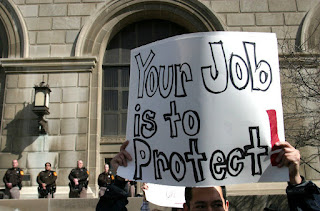 I've really tried to be positive about all this but there's something I have to say. There is absolutely no excuse whatsoever for trampling peaceful protesters with horses. Rebel News reported on leaked RCMP mall cops bragging about the opportunity to use force on peaceful protesters in Ottawa. They are POS. There's no way to get around that and I have to explain why.

In Derek Brassington's Surrey Six affidavit, he said that he saw married men at Depot get off the phone with their wife and kids only to call up their local girlfriend on the side and be all baby this and baby that. He said that it was common and he thought that was inappropriate. Yet he did the exact same thing. He was trained to be a f*ck up and he magnified that role. Clinton Jaws posted a video clip from his training at Depot. He was getting yelled at by a three foot grandmother. It was f*cking ridiculous. My training was a lot more real than that.

So the leaked RCMP comments were from members of the musical ride. The ones on horses that trampled that little old lady. The musical ride has past history as well. Aside from a long history of sexual harassment within the RCMP that resulted in three settled class action lawsuits, the musical ride had a hazing tradition. They dragged a woman through horse sh*t and laughed about it. It's a tradition they said. Like Billy Fordy's dance of the flaming a*shole.

These guys are complete Dr Phil f*ck ups. We saw the police use their clubs on Rebel News' Alexa Lavoie. They didn't just push her with their club, they smashed her with it. They hit a French woman with a stick then pepper sprayed her and laughed about it on social media. I can tell you right now, if this was Ireland we would have a very different solution for you.

Yet this isn't Ireland. This is the land of civilized resistance. This is kind of like the story of Sodom and Gomorrah. Can you find one righteous man or woman in that corrupt city before it burns to the ground? Well we did, but they fired them. The rest resigned. The bottom line is that the police that broke their oath have lost our trust and our respect.

We will never see the RCMP musical ride the same ever again. Whenever we see them now they just get the middle finger and a turned back because they are a disgusting disgrace to our nation. That is a result of their misconduct. They have to own that before they can ever hope of rebuilding their broken trust and finding any respect in the public ever again. Sadly, I don't think any of them even care. They're too self indulged in their booze and their golden badge.

I believe in law enforcement. The Charter of Rights is the law they broke today. We need people who keep their oath not sexual deviants that joke about brutalizing the peaceful civilians that pay their wages. Now you are left with your legacy. Natural justice is swift and simple. You have to live with yourself knowing that we all know the truth. Mind how ya go.