The Continuation of Derek Brassington's affidavit 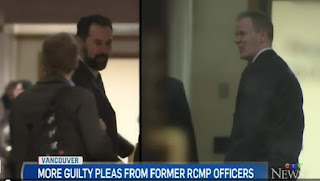 After Googling some names in Derek Brassington's affidavit, I came across a Blog written by a RCMP officer called Behind the Yellow Line. The relevant post is entitled Frat Boys and Egos Gone Wild. It states that "Witness X, also had a girlfriend who the courts are calling Jane Doe 2. Brassington began to spend time with Jane Doe 1, a former girlfriend of both Jamie Bacon and high level gangster Kevin Leclair." (Those clowns traded GFs like hockey cards.)

"Both girls were in their twenties, while Attew and Brassington were pushing forty years old. They traversed the country, staying in hotels with these witnesses, and the restaurants evolved into bars, where alcohol became the fuel for relaxed inhibitions and common sense."

"Brassington told the court that he fell in love with Jane Doe 1, walking hand in hand in Victoria, having sex at the safe house, sometimes in front of others (at one time another female officer was present). Attew for his part, was pursuing Jane Doe 2, sneaking to her hotel room, rolling around the bedroom, groping her, kissing passionately, or sexual touching as the courts like to call it. Not on one occasion, on several occasions."

"If anything Attew was a persistent lover, if not a persistent investigator. One incident occurred in Montreal, where they ran up an $800 bill for liquor as all of them came together, in the bar where Jane Doe 2 was now working. Attew went to her apartment in his conjugal pursuit bringing new meaning to witness management. They were claiming overtime of course during this time and claiming and righting off their escapades to expenses. We never will learn about how much money was involved, but it would have been substantial over many months."

"Accountability in the RCMP and in particular in this Province never seems to get past the first level, and in this instance the Crown has joined in to promote this miscarriage of justice. As for the taxpayer, you are out a lot of money, the lawyers even got special permission to charge more for their services. The RCMP management breathes out a collective sigh of relief knowing that once again backroom deals have cleared out the skeleton from their closets and quickly buried them in the backyard. Attew, Sobotin, Brassington, Johnson, and Michaud are now all divorced."

All of this brings us back to the false charges against Surrey Mayor Doug McCullum by the Save the RCMP in Surrey bullies. Doug McCallum is trying to take Surrey forward while the Fight Progress and Accountability Freaks have hired Bill Tielman to stop him.