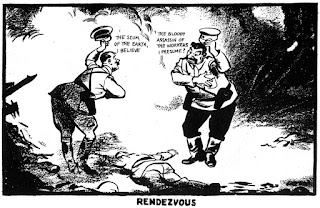 US Fake News is reporting that "Chile is set to vote for a new president on Sunday, with a young former student leader Gabriel Boric on the left battling far-right conservative Jose Antonio Kast, in the most polarized election since the country's return to democracy in 1990."

"An at times heated campaign has seen Kast play up Boric's alliance with the Andean country's Communist Party, while Kast himself has come under fire for his defense of the dictatorship of General Augusto Pinochet that ended three decades ago. What we're seeing here is a debate stuck in the cold war trenches, of communism versus fascism."

That is batsh*t crazy. How about neither? Communism is Fascism. They're both bad.

This is the same stupidity the fake news keeps regurgitating over and over again. ANTIFA, the Anti Fascists, calls everyone who disagrees with them Fascists. Even Canadian WWII veterans. In fact, ANTIFA built the Berlin Wall. They claimed it was to keep the Western Fascists out when in reality it was to keep the prisoners of Communism from escaping.

After the war, West Berlin were not Fascists. They were free. The Communists hated that fact because it interfered with their slavery is good model. When people saw freedom, they realized slavery sucks and they wanted out. That's why they built the wall. To prevent people from seeing what freedom is like and escaping.

Our media keeps regurgitating the same old lie over and over again. They say if you are right wing, you are racist. That's a lie. Just because you want less taxes, more freedom and less government, does not mean you are racist. Candace Owens made a funny coming out video where she told her parents that she was Gay and Conservative. At first her parents were thrilled with the fact that she was Gay then became mortified when they found out she was Conservative. Her mother said how can we tell our neighbors our daughter has joined the KKK?

It was satire. Everyone claims Conservatives are racist yet Candace Owens is black. How can she be racist against black people if she's black? She's not. That's why the mainstream media hate her. She destroys their false narrative. The same with Rob Smith, Brandon Straka and Blair White. Just because you support less taxes does not make you transphobic or homophobic.

For the record, Lennin murdered more Unionized workers than Hitler.