The Great Smog of 1952 and the Fake Environmentalists 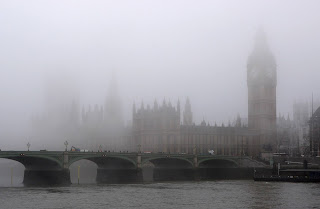 The Weather Network is reporting that "Saturday, December 4th 2021, 1:07 am - Starting Dec. 4, 1952, smog took over London, England, for five days. A high-pressure air mass over the Thames River Valley mixed with the sudden cold air that came in from the west. The city had low temperatures so coal furnaces were blazing across residences. Adding to residential pollution, there was also smoke, soot, and sulphur dioxide from cars, industrial plants, and buses."

The smog was the result of coal. There are far more cars and busses in London now then there was back then. I lived in Ireland for two years in the late /80's. At the time, everyone heated their homes with coal fireplaces. In the south it was open fireplaces and in the north, it was enclosed fireplaces with radiators. Cork is a famous city in the south that is home to the Blarney castle. At the time they had a thick LA smog from all the coal fireplaces.

I wrote home about it and my father said that is exactly what West Vancouver was like when he and my mother were first married. They all heated their homes with coal fireplaces and they had the same LA smog. I was surprised to hear that and shocked what a transformation natural gas had made in Vancouver. That has changed.

In one generation all that toxic smog was gone. Obviously, there's still pollution but the coal fires made the pollution horrific. Industrial coal is the largest source of CO2 emissions on the planet and Communist China is the worst offender. Burning coal to generate electricity is not green.

The article about the Great Smog of 1952 in London states that many people died from the sulphur dioxide in the air. That's what you get from burning coal. The fake environmentalists refuse to recognize what a colossal improvement natural gas is over coal. Making solar panels by burning natural gas is far cleaner than making them by burning coal.