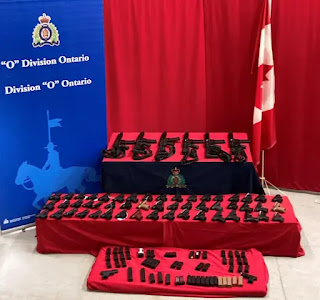 Narcity is reporting that "Two people crossed a river by boat into Ontario with 59 illegal guns and were arrested, according to police. In a press release posted on December 2, Cornwall RCMP said members with their integrated border integrity team conducted a firearms smuggling investigation on November 26 after two people crossed the St. Lawrence River into Cornwall."

"Three big bags were taken off the boat and put into a vehicle that left the area, police said. RCMP then carried out a roadside stop of the vehicle and found illegal firearms and high-capacity magazines. Officers seized a total of 53 restricted and prohibited pistols, 6 prohibited rifles, and 110 high-capacity magazines. Quebec residents Inti Falero-Delgado, 25, and Vladimir Souffrant, 49, were both placed under arrest."

This is where most of the illegal guns in Canada come from. They are smuggled across the border from the US. They do not come from legal gun owners because restricted firearms are all registered. No one commits a crime with a registered gun. They use throw aways instead.

Narcity is also reporting that "This is not the first large gun seizure in Ontario in recent weeks. Last month, an American woman was arrested at a land border in Ontario after Canada Border Services Agency officers discovered 56 illegal firearms in the trunk of her car." 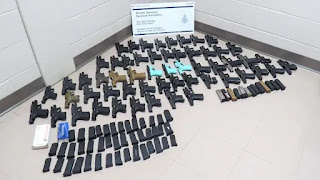