Doug McCallum is still under attack 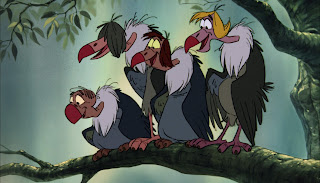 The vultures are relentless and shameless. Post Media Trash is reporting that the police are charging Surrey Mayor Doug McCallum for public mischief because he filed a harassment complaint with the RCMP when he was verbally assaulted by the Save the RCMP freaks outside Save on Foods. When they say stand up to bullies, that's exactly what we should do. 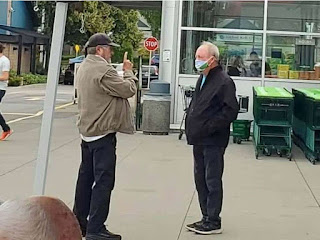 How is that a heated conversation? Doug McCallum is leaving the grocery store and one of the RCMP freaks gets all up in his grill. Obviously there was more than one of them because they took the picture. This is what they wanted you to see. They didn't take pictures of what they didn't want you to see. There is no question these are bullies harassing the mayor when he is out doing grocery shopping. Any other police force on this continent would have charged the bullies. But no, the conflicted Surrey RCMP charged the mayor instead. Ivan Scott's son is RCMP.

Brenda Locke is exploiting the opportunity to call for the Mayor to resign. That is ridiculous. She is the one who should resign for flipping on her election promise as soon as she was elected. Brenda Locke is a skank. I'm sorry but there is no other adjective that adequately describes her. She is a dirty politician who lied to get elected. There needs to be some kind of moral accountability for breaking her election promise. A recall petition should be launched.

Brenda Locke is a bully. She's mad at the Mayor because he stands up to bullies. Brenda Locke was a Surrey MP during Gordon Campbell's era of arrogance railroading the HST and steam rolling over voters. That is why she was not re elected.

She sucked up to Doug McCallum so she could run on his ticket. He ran on a law and order fiscal responsibility platform and Surrey First was wiped off the map. All of the incumbents were defeated because of their tax and spend junket obsession. The only one that was elected was a newcomer from crime prevention. She had no idea how bad Linda Hepner and Dianne Watts were. Dianne Watts was a liar and a bully. She trained Botox Betty well. Brenda is their protege.

Aside from crime and fiscal responsibility, Doug McCallum ran on two main platforms. Skytrain over LRT and Municipal police over RCMP. He wasn't saying defund the police. He said municipal police accountable to Surrey not Ottawa. Brenda Locke joined that platform to get elected. Then a soon as she was elected she broke her election promise and started ruthlessly campaigning against a municipal force for the RCMP. That was a breach of contract. She should resign.

The RCMP have continued to fight the democratic will of Surrey relentlessly. The father of an RCMP officer launched a petition and the RCMP Union posted adds all over the Internet. That is a conflict of interest. The Save the RCMP in Surrey group are absolute bullies.

Any other police force in North America would have charged the stalkers with harassment for harassing the mayor while he was out grocery shopping. The fact that the RCMP has charged the mayor not them is evidence they need to be replaced. The vultures are desperate because Municipal police already have boots on the ground.

While we're on the subject of RCMP dirty tricks we need to talk about Operation Phoenix. That was a task force mandated to go after the Hells Angels in BC though a Regional Task force. The RCMP wanted that jurisdiction back so they sabotaged the mission and got the Hells Angels off.

Once they got that jurisdiction back, what did they do with it? Nothing. Absolutely nothing.RCMP in other provinces make Hells Angels drug busts. The RCMP in BC do not. Allen Dalstrom was a member of the Regional Task Force involved with Operation Phoenix. He was fired for telling a reporter the truth. One of the reasons cited by Douglas for firing Dalstrom is that he believed Dalstrom was the “OCA insider” quoted in Julian Sher’s book about the Angels, The Road To Hell, How the Biker Gangs Are Conquering Canada, who said that, when it came to organized-crime investigations, the RCMP had done “f--- all here for 25 years”. So once again we see someone fired for telling the truth. The Ontario Biker Enforcement Unit is successful because the RCMP doesn’t have anything to do with it’s administration.

Richard Barszczewski was a RCMP officer in BC who prevented the BC Hells Angels from getting arrested in the Western Wind bust when the US authorities seized a boat with 2 1/2 tons of cocaine en route to them. Can we see the pattern yet? The investigation of organized crime in BC should be regional like it is in Ontario, Alberta and Quebec. It should be completely separate from the RCMP because E Division is corrupt. Unfortunately, so is the NDP.

As for Doug McCallum, Surrey has greatly benefitted from his leadership in this current term. LRT on the ground down 104th Avenue would have been an infrastructure nightmare. Turning those four lanes into one lane each way with no left turns would have been insane. The clowns pushing that did not live in the area and had no idea what kind of chaos that would have created. Perhaps they did but didn't care because of the dirty money in their pocket.

Forming a municipal force in Surrey is a clear step forward. Surrey is the largest city in Canada without its own police force. Brenda clueless and the Surrey first leftovers are defiantly standing in the way of progress. Doug McCallum is fiscally responsible. Surrey First was anything but. Tax and spend junkets out the city in record debt. Surrey's budget is a lot better than Vancouver's. Kennedy Stewart is not fiscally responsible. He came from the NDP and has no party behind him. All he does is raise taxes which drives away business. Doug McCallum is doing a lot better.