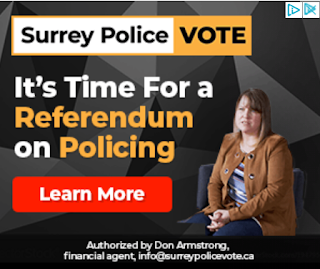 Update: Surrey's new municipal police force to have officers on the ground by November

Doug McCallum won the election for Surrey mayor based on a promise to stop the LRT down 104th in favor of Sky Train and to replace the RCMP with a municipal force. Surrey is the largest City in Canada without its own municipal force. Obviously the RCMP members, family and union are fighting that tooth and nail which reinforces the need for us to take this crucial step forward.

Since the election victory, we saw the father of a RCMP officer launch a petition attempting to overthrow the results of that election and keep the RCMP in Surrey. Then we saw paid ads from the RCMP Union claiming Surrey residents want to keep the RCMP. No they don't. I live in Surrey and I voted for Doug McCallum so we could finally move forward.

Today I saw this paid ad calling for a referendum on the last election. As bizarre as that sounds, they claim it is being spearheaded by the widow of someone whose husband was mistakenly murdered in the gang war. First of all, that widow did not pay for that ad. The union or some other lobbyist group did. The other ad with the widow's picture on it says it's paid for by Don Armstong who is the Director of Finance at National Police Federation which is the RCMP Union.

Secondly, everyone knows that the Mayor's plan to form a municipal police force in Surrey like every other major Canadian city, involves retaining IHIT the ones that screwed up the Surrey Six investigation and are in charge of murder investigations.

The Delta Police Department spearheaded the Red Scorpion drug bust. The CFSEU did not. Surrey is larger than Delta and Delta has its own police force. ALERT in Alberta does what it is mandated to do. After Surrey gets its own police force, we need to put organized crime investigation back under Regional jurisdiction like Alberta so we can once again start confronting crime instead of aiding and abetting it. They don't want to stop crime, they want to profit from it.