Castanet is reporting that there was a "motorcycle crash along Highway 97 on Saturday. The crash occurred at the intersection of 97 and Hebert Road after 5:30 p.m. Fire crews and paramedics were on scene." Several motorcycles were pulled over. One onlooker was wearing a support patch and another was wearing a Hells Angels patch. 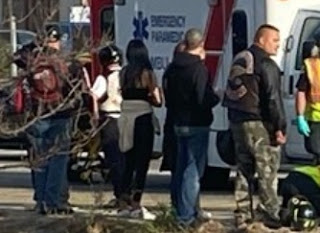