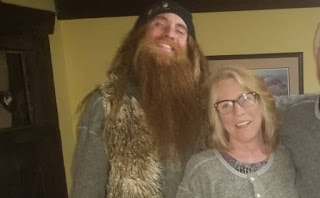 Update: Check News is reporting that "A mother accused of shooting her son resulting in his death in their Port Alberni home is now facing a more serious charge. Samantha Dittmer, 61, is accused of shooting and killing her adult son Jesse McPhee. Crown Counsel stayed the charge of careless use of a firearm against Dittmer Thursday morning and laid a new charge of manslaughter using a firearm. Dittmer will remain in custody until her next court date Sept. 7. "

CTV is reporting that "One man is dead after a gun was fired inside a home on 18th Avenue in Port Alberni, B.C., on Sunday evening. Police are not releasing the names of those involved but CTV News has learned the victim is Jesse McPhee and the woman arrested at the scene is his mother, Samantha Dittmer." That sounds kinda Dr Phil.

"Another neighbour, Dylan Gauthier, says the home was the scene of frequent family disputes. 'Bickering next door is kind of common so I thought maybe there was just a dispute.'”

Check News is reporting that "A Port Alberni mother has been charged with the careless use of a firearm in the shooting death of her son. Charges have been laid on Samantha Jesselyn Dittmer after police responded to reports of the shooting of her son, Jesse McPhee, on Sunday night."