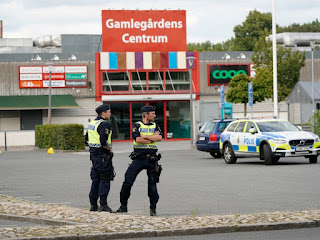 The Independent is reporting that "Three people have been hospitalised and a further three arrested after a shooting in Sweden, with police reportedly uncertain whether there could be more casualties or perpetrators." The Swedish newspaper Expressen reported that one or more perpetrators left the main scene of the shooting by motorcycle. There were also reports about gunshots in the same area on Monday evening."

Last year the Economist reported that "In August a criminal clan set up roadblocks in Gothenburg to catch members of a rival gang. The police intervened and made several arrests, but failed to charge anyone. The gang war in Gothenburg eventually ended not because the cops stopped it, but because the gangsters negotiated a truce. Swedes are shocked to see such instances of the forces of law and order losing control of the country’s streets."

"Sweden remains exceptionally safe—its murder rate is only a fifth of America’s. But a surge of spectacular gang crimes has captured public attention."