Israel responds to rocket attack in the north 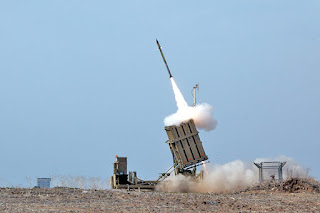 The Canadian Press is reporting that "Sirens sounded in northern Israel on Wednesday warning of a possible rocket attack from Lebanon and television reports say Israel is firing back."

OK this is not good. A rocket attack in the north means it's not Gaza. Two weeks ago Haaretz reported that "Hours After Syria Reports Israeli Strike, Two Rockets Launched From Lebanon. Israel intercepts one of the rockets, while the other lands in an open area after rockets launched from Lebanon set off sirens in several Western Galilee communities near the border."

Israel Hayom clarified that "The incident takes place mere hours after Syria alleges Israeli airstrikes against weapons depots that belong to Iranian-backed militia operating in Aleppo's Safira region." This is really awkward for me because I have friends on both sides of the conflict.

Obviously, I support Israel's Iron Dome missel defense system. Canada should have one. It's not even passive aggressive. It's just good common sense. Israel has the right to exist and to defend itself just like everyone else does.

When I was in my early twenties I worked on a kibbutz in Israel. One time I heard the air raid sirens go off and I thought OK this is it, time to head for the bomb shelter. They had a small dusty old gym in the bomb shelter I used to work out in.

The recent rocket attack from Lebanon was obviously lame just like the rocket attacks from Gaza. However, as I previously explained, they are concerning because they are indiscriminate. They aren't targeting military sites because their guidance system can't be controlled. They're completely random and affect civilians.

As I previously said, if Canada or Mexico were shooting rockets randomly into the US, the Americans would be pissed. Yet in this case we also have to look at Israel's air strikes in Syria.

Israel claims it is shelling Iranian backed military sites in Syria. OK so if that is true, what are Iranian backed military sites doing in Syria? Is it to attack Israel? I don't think so. It's to defend their oil pipeline. As I previously said, the war in Syria has nothing to do with terrorism or human rights. It's about rival oil pipelines. One from Iran, the other from Quatar. 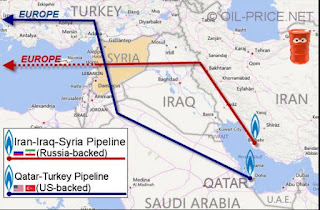 I say build both. I'm all for the free market. The problem with oil companies is the same with drug dealers. Everybody wants a monopoly on the market. A free market benefits consumers.

To be honest, I trust Russian oil more than I trust Saudia Arabia. The Saudis are the ones price fixing and extorting Russia to cut back production so they can raise prices. Saudis are CIA arms dealers. They have supplied far more terrorist organizations than Iran ever has.

Posted by Dennis Watson at 3:13 AM