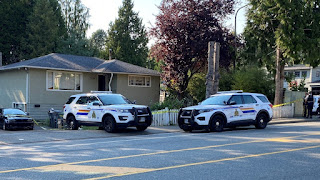 CTV is reporting that "Two people are in custody and a man is in hospital after a shooting inside a Surrey home Thursday afternoon. The incident happened shortly before 2:30 p.m. at a home near the intersection of 148 Street and 91A Avenue. Officers converged on the area and encountered the suspect vehicle, the driver of which rammed a police vehicle while attempting to flee."

"Police said they were able to stop the suspect vehicle and arrest both of the people inside. They also seized a firearm during the arrests. The victim of the shooting was taken to hospital with non-life-threatening injuries, police said." Illegal guns in the hands of crackheads.