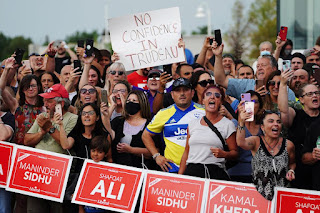 The Toronto Star is reporting that "Growing anti-vaccine and anti-lockdown protests dogged Liberal leader Justin Trudeau on the campaign trail Friday, forcing campaign officials to cancel a Friday evening rally in Bolton, Ont., over safety concerns. It was the latest in a series of tense interactions between Trudeau and protesters, including some who appear to have followed the Liberal leader to campaign events across provinces."

The circle of life, like the eb and flow of political tides, watch the seasons change. When Justin Trudeau was first elected, Stephen Harper hate was high. Justin had a rock star popularity. Last election, that popularity had plummeted and we saw the rise of Justin hate. People didn't just start not liking him, people started to really hate him.

My daughter noticed the change last election and pointed out at first everyone liked him but last election everyone on social media started to hate him. Now it is much worse. Justin Trudeau has inspired hate. People really hate him as do I. Justin Trudeau is nothing like his father. That's why I call him Commodus from the movie Gladiator.

Justin's father gave us the Charter of Rights. He protected civil liberty by law. Commodus admires the dictatorship of Communist China who kill political prisoners for organ harvesting and are in the middle of a Muslim genocide. It kind of makes his stand on Islamophobia false.

People see Justin as fake. They see him as a fake feminist, a fake Trade Unionist, a fake person. He's plastic and untrustworthy. All he does is spend other people's money. That makes a lot of people angry because it their money he's spending. I do see the tide changing.

Hate for Justin is on the rise because people can see though him now. His ship is sinking. It's like the age old adage, pride cometh before the fall and great shall be the fall thereof. So mote it be. 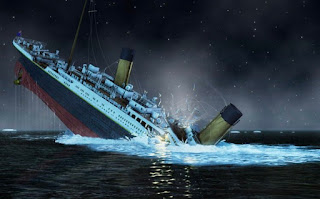 "Canadian Prime Minister Justin Trudeau's Liberal Party appears to be ceding popularity to its Conservative rivals, according to polls published Saturday, with early elections only weeks away."

The Conservatives of Erin O'Toole, the main opposition party, took a slim lead as support for the Liberals has eroded in recent days, according to a tracking survey by Nanos Research conducted for the CTV network and the daily Globe and Mail. The poll shows Conservatives favored by 33.3 percent of eligible voters, to 30.8 percent for Trudeau's Liberals."