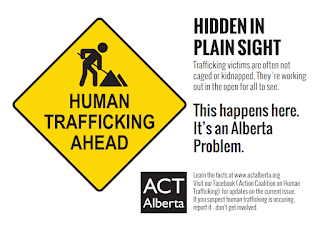 Todayville is reporting that "A physician is among 10 people charged in a human trafficking investigation in southern Alberta. Lethbridge police say a 15-year-old girl was selected, groomed and taken to specific locations where the alleged offences took place. They also allege there was sexual activity with a 13-year-old. Those charged are from Lethbridge and Calgary and also include a business owner and two teenage boys." ACT Alberta.

In April ALERT arested a guy from Halifax for human traficking in Edmonton.

Alberta has a human trafficking task force. BC does not.