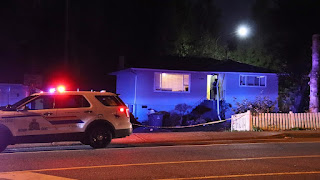 CTV is reporting that "Neighbours say a home on 148 Street in Surrey is behind police tape for a second time in less than three weeks, but police say there is no indication of a connection between the two shootings at the residence."

"Surrey RCMP told CTV News the latest incident happened around 3:30 a.m. Sunday at the home near the intersection of 148 Street and Fraser Highway." That's by Green Timber's pub. The Hells Angels ran an afterhours near there were someone else was shot. Unelated of course.