Surrey's 23rd murder of the year 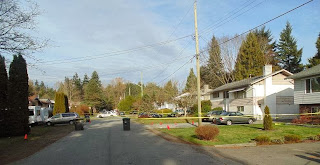 The Vancouver sun is reporting that a man's body was found at 91 and 147A street this morning. Taking Surrey over the top for the record number of murders in a year which was 21 back in 2005. We're now at 23 with a month left to go.

I do however, have the inside scoop on this one. According to local residents, the house where this homicide took place is a known after hours illegal booze can. The neighbors have been complaining about it for seven years. Two years ago a guy was shot in the knee there. When they said after hours club I said what for the Green Timers pub? They laughed and said no. They said people from Surrey don't where stilettos. I said oh so it's pretty high end. Yes they said. They must be from Vancouver. There's prostitution, guns, you can get anything you want there.

So once again we see an once of prevention is worth a pound of cure. Dianne Watts and Bill Fordy rush in with their publicity side show trying to promote their own political campaigns while they were the ones that created the problem in the first place. The residents have been complaining about that place for seven years. The police and the city did nothing about it. The residents said what are you going to do, wait until someone gets killed? Sure enough, now someone has. That negligence falls upon the people that refused to do anything about seven years of complaints.

Update: The Vancouver Sun and the Vancouver Province are both reporting the name of the victim is Ronald Richard Lomas who has extensive criminal record. Both papers are confirming he was murdered in an illegal after-hours bar in surrey. The question is, if the neighbors were complaining about it for seven years, why didn't Dianne Watts and Bill Fordy do anything about it?