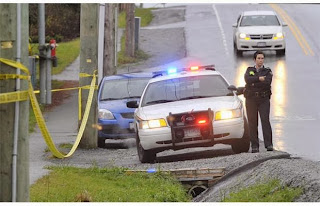 Another murder in Surrey today takes us over the top breaking the previous record for homicides in one year which was 21 back in 2005. Surrey has quadruple the crime rate than Vancouver. Which clearly shows Dianne Watts crime prevention coalition was a fraudulent scam as is her recent publicity stunt about the creation of a task force.

If you want to reduce murders in Surrey then stop letting them sell crack outside the Front Room. It’s that simple. The fact that they are not doing that makes us wonder where some politicians are getting their campaign contributions from.

Update: The Vancouver Province is reporting that the murder victim was Mark Winston Berry, 44 and that he had 25 criminal convictions since 1988 for offences that include robbery and assaulting a police officer.The exact cause of death was not released.