Surrey’s 21st homicide of the year 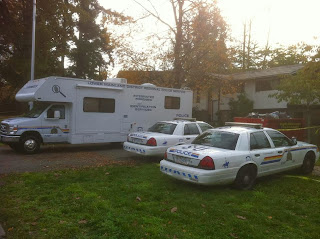 Surrey had it’s 21st homicide of the year over the weekend. I’m slow to report on it because the details were pretty sketchy. We heard that IHIT was called in and a suspicious death was being treated as a homicide. At the time it was reported that the victim suffered a cardiac arrest after a home invasion. Kinda strange. Yet in today’s article in the Vancouver Province one witness claimed their friend was shot in the back while they slept. Somewhat different than a cardiac arrest.

Hopefully more details will follow to clarify what really happened. The Vancouver Province is reporting that this is the 21st murder in Surrey so far this year while Vancouver has only had five homicides so far this year. The most murders Surrey had in one year was 21 back in 2005 so we’ve tied the record with just over a month and a half left to go in the year. The photo was taken by a blog reader on scene.