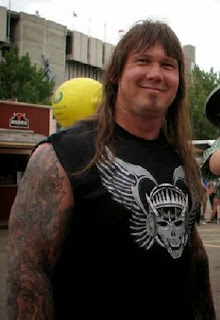 Calgary Hells Angel and former Olympic bobsledder Ken Leblanc has been arrested for extortion. Police allege Leblanc threatened a city resident and claimed he was owed over $150,000 from a failed business deal. He was arrested at his home which is believed to be associated with the Hells Angels puppet club, Unforgiven.

The Calgary Sun is reporting that LeBlanc spent two periods in jail in Ottawa in the late 1980s and early 1990s and was involved in a loan-sharking case in Calgary in 2008, which saw three men convicted after purchasing an outstanding debt owed to Leblanc and his brother.

Locally, the Hells Angels are famous for creating manufactured debts and collecting on those fictitious debts. Investing money in a shady company and saying I’m going to kick your ass if you don’t pay up is one thing, yet this appears to be something very different.

One source claims LeBlanc didn’t invest anything, it was a third party giving money to another individual that scalps tickets with promises of big returns. The third party (Ali El Sayed) who just went to jail for 9 years and 3 months on mortgage fraud, was extorting the ticket guy and now wealthy restaurant owner Dom Tudda. Saying he guaranteed the money since he met the ticket guy through him. Since July Ali and Ken have been trying to extort Dom for 150k.

Another source claims that Anthony Pittarelli, a Calgary Hells Angels associate, was charged with theft over $5,000, fraud over $5,000, possession of the proceeds of crime and money laundering through a Ponzi scheme tied to Front Row Tickets. Apparently the Hells Angels made a lot of money off this scam.

Evidently, other Calgary members were ripping off Ken when he was in jail. Anthony was paying money to them while Ken was in jail. The other members were stealing it and when Ken got out sh*t hit the fan. One of them was sent out of town and had to make payments to Ken for his safety. Once again the Hells Angels L&R lie reveals a selfish world of betrayal and greed.

The Nanaimo Hells Angels were caught on a wire extorting a guy for a $2,500 debt which they turned into a $100,000 debt. "Basically, you're just getting punished," Sandhu says. "I do feel there's some tension with you and some of the guys."

When you think about it, the Surrey Six murder was about extortion. Jamie Bacon was extorting Corey Lal on behalf of Larry Amero and the Hells Angels.

Posted by Dennis Watson at 3:27 AM