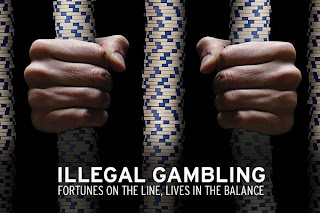 Rodney Scott Garinger, a 45-year-old from Calgary, and his younger brother Kevin Todd Garinger, 43, of Lethbridge, have been charged with running an illegal gambling operation in southern Alberta similar to what was done in Toronto. Thomas John Ross, a 46-year-old highly-ranked golfer from Vernon, B.C., is wanted on Canada-wide warrants.

He is said to be an associate who allegedly supplied large quantities of marijuana to the Garinger brothers and is charged with trafficking and possession for the purpose of trafficking. Illegal gambling and drugs. What do you suppose the odds are that it was for the red and white?